Graduated, with distinction, Warsaw Academy of Fine Arts with a diploma in paintings and graphic art in 1965. His work including painting, sculpture and graphics has been shown at over 40 exhibitions, among others in the United States (New York City, Washington, Atlanta, Chicago, Boston, Philadelphia), Germany, Sweden, Finland, France, and Australia. His creative works has been exhibited at three Olympic Games – in Barcelona, Atlanta, and London.
Lustyk has won 25 awards for his posters and paintings, among them 8 at competitions sponsored by the Polish Olympic Committee.
His latest distinctions include the Silver Medal at the Poster Biennal in Katowice in 2013, Silver Olympic Laurel in Arts in the same year. In 2012 he realized a project entitled “The Painted Olympic Chroncle” and in 2016 a unique project called “Caligraphy of Sports”.
For his artistic contributions during the horse races in Louisville, Kentucky he became one of only two artists in 124 year long history of those famous races to be nominated the Oficial Artist of the Kentucky Derby.
Since 2002 Lustyk has collaborated with the Great Theatre-National Opera in Warsaw, National Museum of Dance in Saratoga Springs, NY and Polish Olympic Committee.
For the 200 anniversary of the birth of Fryderyk Chopin he assembled a set of paintings untitled“Painting of Music”, many of which had been previously exhibited and interpreted musically both in the USA and in Poland.
For last four years Boguslaw Lustyk has been creating, in the center of Warsaw, installations in the form of barricades dedicated to the memory of the Warsaw Uprising of 1944. They were named “Dziś idę walczyć, Mamo” (I am going to fight today, Mother), „Powstańcze Szańce” (The insurgent’s ramparts), and „Exodus”. 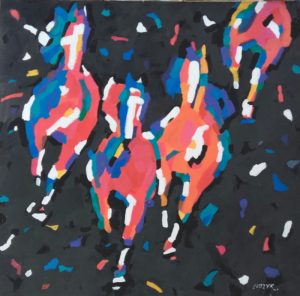 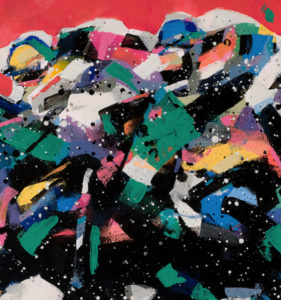 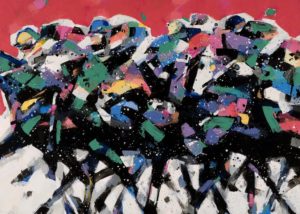