The dance of masks

…This painter rooted  in Mediterranean culture make an exuberant art with full of materials traces embedded in sand, card board…. He likes that his painting is fertile, blistered, lumpy.
It must overflow, flowing, creases, stirs.

The color engulfing sand, metal, paper, recycled objects…
He claw and grinds the figure it scrapes the material.
Figures and strange equations, false or real calligraphy reveal the secret confidences that torment the artist about the founding civilizations of his culture.
Whatever he appropriates the canvas by square, through organized worn or that the attack by a foil set squirt leaving the line, it has to tell blow, the images are spouting such washed away his emotions.

He runs his eyes over the canvas. He weighs the powder between his fingers then he throws like the seed sower.
His jerky movements, gestures are precise, rushed, they become rituals. His hand provided with a thin knife looking into matter the exact spot where she sketches a mouth, a nose … His faces arrive in groups, clustered by heap. His characters are born (Grimes?) made up, mixing concealed their identity.

These are white masks, Indian masks, African, Venetian, Mexican. Animal masks, poets, purple mask, mask princes and their buffoons…
He found his breath in the streets of Nimes, thinking of Cervantes…

The poetic world of Ventabren  is a medley like the role play that people endorse in the society… The grotesque dance, the amazing colorful and noisy masquerade its rowdy characters, barbaric, primitive mime drama, and the tragic side of life.

True to his culture, he directed as in a dream instantly recognizable, his main character. Chew soberly and in a few black and thin lines with his long face white and sad, lost in his old dreams Don Quixote, the madman, the sage, the saint or artist.
Ileana Cornea Paris in February 2015 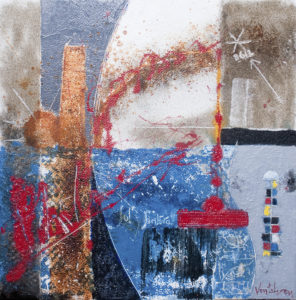 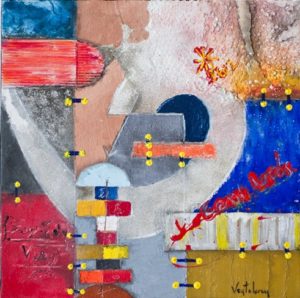 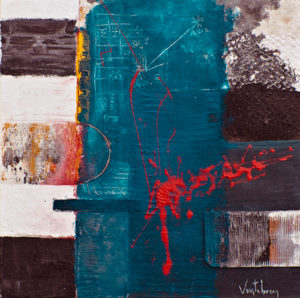