Hans Innemée studied graphic design at the Academy of Art in Tilburg and was for a long time an amateur musician. During the nights he played in a band while giving drawing classes in several schools during the day. Initially, his art consisted of a large number of flax-cuttings but later he began to experiment with the monotype technique, for which the Inca paintings or oil paintings are rolled up in glass sheets. A thin piece of paper is laid on top and the drawing is made behind. The graphic composition is done by gluing the final drawing or making a collage of several drawings on the panel. Oil pastels are used to add color to the panel. Innemée continues to use this technique. His sense of perspective is inspired by the English comedian Tommy Cooper, who knew better than anyone how to joke about the weaknesses of humanity with light mockery. The dreams of a musical career belong to the past. Innemée enjoys freedom in his study and creates with great joy new allegories of human situations represented through animals. 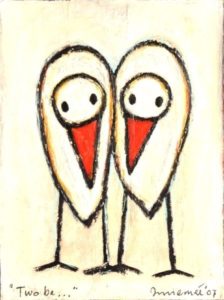 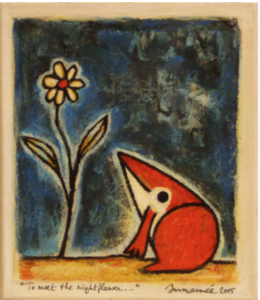