An architect converted into an artist to explore time’s mysteries.
Quentine Carnaille was born in 1984 in Rubaix, northern France, and he started developing jewelry
and objects while studying architecture in Belgium. In 2008, a year before graduating, he create a pair of cufflinks as a gift for his father. The pieces were crafted from two mechanical watch movements from the 1930’s.
A month later, the cufflinks find their way to the ‘Louvre des Antiquaires’ in Paris in a well-known antiques dealer.
In parallel, his creations multiply, his first exhibitions take place and the artist wins several awards.
The same year he obtains his Diploma of Architecture and a prize that enables him to open his own workshop/boutique in Lille (France) thanks to the label ‘Maison de mode’. He lives in the boutique’s basement for a year in order to work day and night.
The young artist develops and increasingly thorough reflection around the notion of time, querying themes likes infinity, relativity, the ruin, or else the origin of time reading, astronomy.
His work diversifies and thereby is born several sculpture mixing magnetism, reflection and levitation. 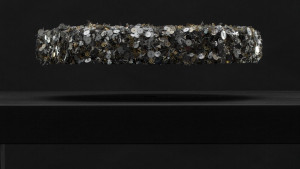