It is the awareness of things to come, of looming catastrophes and events of an apocalyptic scope that characterizes the collages of Robert Stieghorst. They are immersed in that famous Sense of Wonder, known to the adepts of the Science Fiction genre as a core experience, also recognized as the presence of the sublime in secular times and which is enhanced in the works of Stieghorst by the choice of his subjects.
There is a discrepancy between the narratives which operate on an immense scale, as fit for narratives in the realm of that field and the modest size of the works and this imbalance creates a sense of gravity, mirrored by the compositions of the works in which often the figures are situated at the picture’s lowest level, whereas above them planets and suns, structures and events are hovering yet threatening to fall. The people in Stieghorst’s Collages are almost always observing a cosmic event and frequently are seen from the back, that is to say we look at figures replicating our act of looking, which is another indication about the introspective character of the works.
Though their themes are grandiose they refuse the temptation of the spectacle. This attitude may explain the choice of the collage medium, which by its very nature, is both tragic and ironic, that is it leaves a space for uncertainity, a quality no spectacle can live with.
That Robert Stieghorst choses collage as his method enables him to generat a new syntax. He has an endless arsenal of images and like a bricoleur builds from images meant to exist in different contexts new sentences. One may say he resets the reality in which those images already existed and give them a fresh meaning and a new perspective. It is a hybrid method that initiates a third space where known truths start to quiver and are revalidated, a space whose associative dynamics are not clear. This imbalanced state, reflected time and again in the very compositions of the works, similar to the literary form of the cento and its eccentric intertextuality is there to wake the dead and to reboot the imagination, an act much needed in times where this human quality is systematically disappearing through blinding spectacles.
And these are the reasons why I have great respect towards the works of Robert Stieghorst.
Doreet LeVitte-Harten is an internationally renowned art historican and author. She works as a curator in Germany and Israel and is appointed for the Franz Rosenzweig guest-professorship at the Kunsthochschule Kassel. 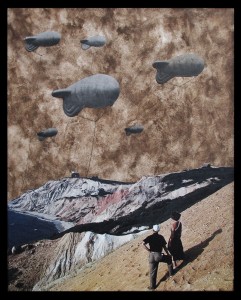 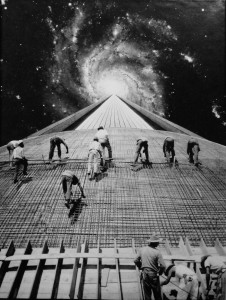 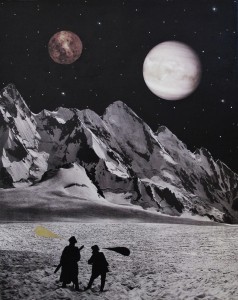